Earlier this month, the Texas House passed H.B. 1177, a bill that would allow people who are evacuating after a disaster declaration to carry a gun without a license up to 7 days.

On Friday, May 24, the Senate passed their version which shortens the time period to 48 hours, but allows the governor to extend that time if needed.

The new law has to pass the House once more and go to the governor for signature. If signed, it would take effect September 1, 2019. The 86th Legislature runs from Jan. 8 to May 27 (today).

As a licensed-to-carry gun owner, I don’t know how I feel about letting unlicensed people walking around with guns during a stressful time. (Guns would be allowed in shelters too – if the shelter owner allows it.) I guess the legislature is trying to extend the castle doctrine during a disaster to stop looting and allow people to travel with protection (?). 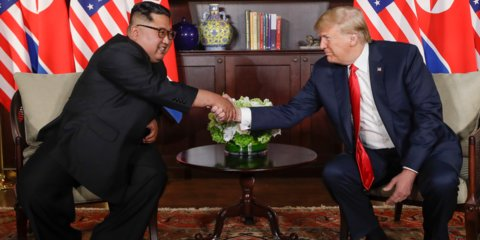 They met in Singapore on June 12, 2018, to discuss nuclear disarmament of North Korea.

Just two weeks ago Pres. Trump sent a letter canceling the summit. These sure are strange times we are living in – he has to be (one of) the oddest president.

Last night, the United States, France and the United Kingdom, launched airstrikes against 3 strategic targets in Syria. The strikes were in reliation against alleged chemical weapons attacks that occurred on April 7, 2018. Russia, a Syrian ally, warned such actions will have consequences. Here is a brief timeline of events that have some wondering if we’re on the brink of World War III.

END_OF_DOCUMENT_TOKEN_TO_BE_REPLACED

Austin was rocked by 6 bomb blasts in 21 days. The suspect, 23-year-old Mark Anthony Conditt of Pflugerville, Texas, was killed in the last blast. His motive has yet to be determined. Here’s a timeline of what happened.

The bad news is we may not be finished with this person or their bombs. FBI agent Chris Combs, head of the agency’s San Antonio office, said, “We are concerned that there may be other packages that are still out there.” Source: KBTX.com

UPDATE: More than 30 races are headed to runoffs on May 22. I think I’m eligible to vote for one: Lupe Valdez (D) and Andrew White (D) for governor. Source: Texas Tribune.

Commissioner of the General Land Office Full disclosure, I graduated from the University of Florida in 1995.

Judging by the tweets (#SpencerAtUF), a lot of people showed up to protest and now they’re walking out of the building.

Spencer, who heads the National Policy Institute, a nationalist think tank, is scheduled to speak at 2:30 p.m. EDT [October 19, 2017] at a [University of Florida] campus performing arts center. The university said it did not invite him to speak, but was obligated by law to allow the event.

Richard Spencer’s event at the university in Gainesville, which prompted the governor to declare a state of emergency to prepare for possible violence, comes about two months after rallies by neo-Nazis and white supremacists in Charlottesville, Virginia, led to a deadly clash with counter-protesters.

The school said it will spend more than $500,000 on security, and the National Policy Institute is paying more than $10,000 to rent the facility and for security within the venue. Source: Reuters.com

Last December, Spencer visited Texas A&M University, and was met with a small crowd, most of whom were protesters. At that time I said watch this guy we’ll see him again.

Remember, this fight is far from over:

A federal judge ruled on Monday [April 10, 2017] that the voter identification law the Texas Legislature passed in 2011 was enacted with the intent to discriminate against black and Hispanic voters, raising the possibility that the state’s election procedures could be put back under federal oversight. Source: NYTimes.com

Judge Nelva Gonzales Ramos, United States District Court for the Southern District of Texas, had made a similar ruling in 2014, but after Texas appealed her decision, a federal appellate court instructed her to review the issue once more.

Then came the 5th Circuit Court of Appeals ruling which said Judge Ramos relied too much on Texas’ history of discriminatory voting and other “infirm” evidence.

Judge Ramos wrote the 5th District’s evidence “did not tip the scales” in favor of Texas.

Many southern states have fought the federal approval requirement for amending voting laws. Most of the issues were lifted when the Supreme Court decision in 2013 invalidated a key part of the Voting Rights Act of 1965. Source: NYTimes.com

And finally, something new:

With the ruling, two federal courts – in consecutive months – have found that Texas lawmakers knowingly discriminated against Latino and black voters in elections. In March, a three-judge panel in San Antonio ruled the Legislature illegally “packed” and “cracked” minority populations in certain districts while redrawing the state’s congressional map in 2011 – an effort to reduce their influence across Texas. Source: TexasTribune.com

Remember that phrase “packed and cracked” aka gerrymandering. Was the riot a black mask, black flag operation? I mean look, there’s a bunch of people covering their faces, rioting and causing destruction, for what? To cancel the meeting? or distract people from seeing what’s going on: Trump targeting a place to cut funds when they don’t comply. They couldn’t comply. It was a catch 22. Allow Milo to speak and risk death and destruction (after they whip the crowd into a frenzy), or cancel the event and risk (some uninspired) destruction; they chose  to cancel.

I have no doubt Steve Bannon could get a small group to riot, distract, and fain hate towards Trump, then Trump could use whatever excuse he wanted to target funding for anything; get public institutions to comply and you conquer the public. If this is the case, I agree with others, Donald your “slip is showing.”

This is the same law we keep hearing about. Texas is determined to have it decided one way or the other. In the last chapter of this saga I reported that the Fifth U.S. Circuit Court of Appeals in New Orleans said that the Texas voter-identification law discriminates against blacks and Hispanics, and ordered that temporary remedies be put in place by the November election.

On Monday (January 23), The Supreme Court rejected  the appeal from Texas officials seeking to restore the state’s voter ID law.

“Chief Justice Roberts made it very clear that the case will be an even stronger posture for Supreme Court review after further proceedings in lower courts,” Ken Paxton said in a statement. “Texas enacted a common sense voter ID law to safeguard the integrity of our elections, and we will continue to fight for the law.”

So, we haven’t seen the end yet. Back to the lower courts (drawing board).