With ever mounting deaths, scientists have been under pressure to develop a COVID-19 vaccine.

Moderna, Inc., reported that they have developed a COVID-19 vaccine that is safe. Phase I testing (45 subjects) appears to elicit the kind of immune response capable of preventing the disease. There were no no serious side-effects after the first trial. Source: NPR

Phase II can start right away, and the company hopes to start phase III in early July. 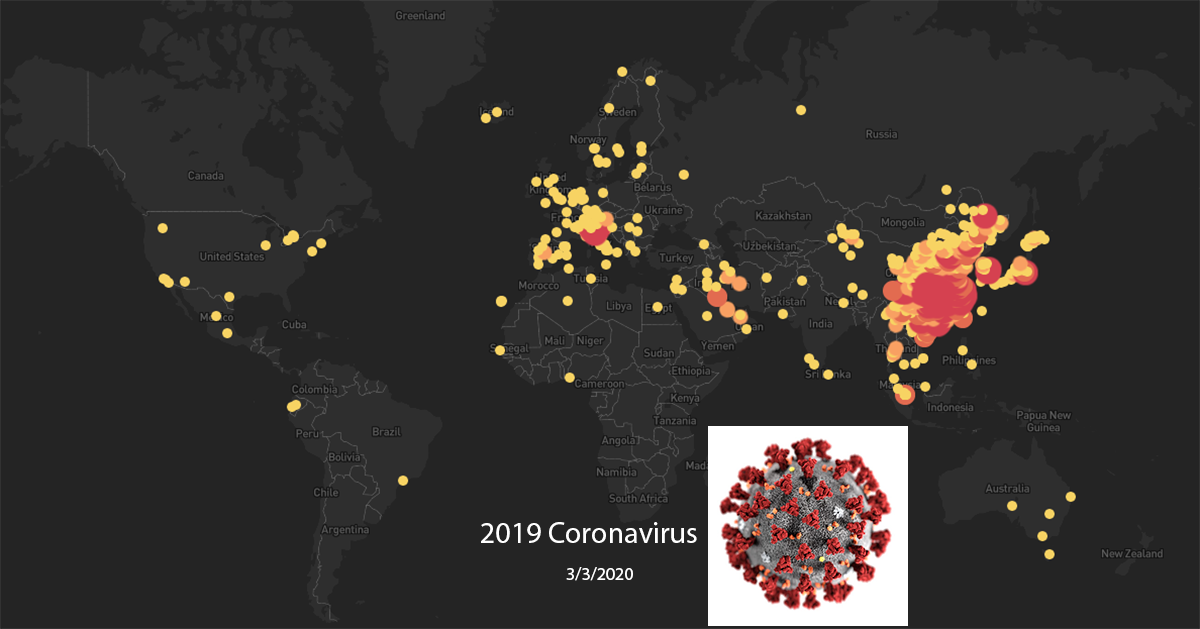 This new virus is called severe acute respiratory syndrome coronavirus 2, or Sars-CoV-2. The disease it causes is called Covid-19. Source: Wall Street Journal. This is a serious disease – “a potential pandemic.” They think it originated in a (animal) market in Wuhan, China, on December 1, 2019. As of March 3, 2020, the WHO reports that there are 92,315 confirmed cases – 3,131 deaths; 60 cases in the US and 6 deaths.

The WHO and the CDC are monitoring the disease very closely, and they are taking measures to minimize the spread of the disease – no thanks to President Trump and Vice President Mike Pence, his appointed “White House coronavirus response coordinator.” Source: Politico.com

Countries like China (Wuhan specifically) have been shut down; affecting the global economy. Hong Kong, Italy, Spain, South Korean, Japan, and Iran have also been hit hard. There’s talk of a global recession if this goes on for too much longer. (President Trump says it will be over by April, because of the warmer weather.)

A big health concern is the massing of people: any place or event where people gather is considered dangerous. The Summer Olympics, scheduled to open in Tokyo, Japan, on July 24, are in danger of being cancelled – or at best delayed for months. “March Madness” basketball tournaments might be played without fans. The Major League Baseball Opening Day is scheduled for March 26; they’re monitoring the situation.

Last week the WHO declared COVID-19 is a pandemic. Things are getting worse in the United States. Tomorrow, we’re starting to work-from-home and shelter-in-place for at least 1 week and possibly up to 8 weeks. It is already affecting the US economy, and we are looking at a global recession. Mnuchin dropped the “we could reach 20% unemployment” bomb, and the Fed cut rates to 0.0%. Smaller restaurants and retail shops in my town – and every city and town – are closing; health departments are mandating bars & restaurants close dining rooms. Some restaurants are adjusting – drive through, curbside, home delivery, etc.

Many States have postponed their Primaries until Summer. The 2020 Summer Olympics has been postponed until July 2021.

We are still stay-at-home/work-from-home, but there are signs that we will begin to “restart the economy” in phases in May.

Countries around the world are working to “flatten the curve” of the coronavirus pandemic. Flattening the curve involves reducing the number of new COVID-19 cases from one day to the next.

Beginning in May, the President and the states’ governors were looking for ways to jump-start the economy – with coronavirus cases still increasing – and risking more American lives.

President Donald Trump fixed his course on reopening the nation for business, acknowledging that the move would cause more illness and death from the pandemic but insisting it’s a cost he’s willing to pay to get the economy back on track.

Texas A&M President Michael Young basically told everyone to continue to work-from-home until until further notice (probably through May, maybe through June), but he – and Chancellor Sharp – want to have campus open for the Fall 2020 semester; all summer classes/activities will be online.

On May 18, 2020, Governor Abbott issued an Executive Order (GA-23) to expand reopening the state of Texas: easing restrictions on onsite dining in restaurants (50% capacity), bars (25%), tattoo parlors, child-care, gyms (25%). At the end of May more restrictions will be lifted.

Cases have been “spiking” in Arizona, Texas, and Florida, after these states began opening up in June. On Thursday (July 2) Governor Greg Abbott issued an Executive Order (GA-29) requiring all Texans to wear a face covering over the nose and mouth in public spaces in counties with 20 or more positive COVID-19 cases, with few exceptions.

Texas has once again broken its single-day record for new coronavirus cases. The state reported 10,028 new cases Tuesday [July 7] as officials warned that hospitals are reaching capacity. … The state also set a new record for single-day deaths, with 60.

Meanwhile, we are still working from home (week 17), summer classes are 100% online, and we’re in limbo looking at current case numbers and trying to plan for the future. The current plan is to have 50% online and 50% face-to-face classes in the fall with classes starting earlier on August 19 and ending November 24. Class days will be longer too 8 am – 8:35 pm, and conference rooms will be used as classrooms.

A couple buzzwords have surfaced as a result of the H1N1 (swine) flu.

“Social distancing” and “pandemic” are the latest additions to the vernacular. Avoiding crowds of people where the risk of infection is the highest is the social distance thought to reduce the spread of swine flu. It’s an airborne virus and is thought to spread quickly among people in close contact. If we avoid contact we avoid infection.

The word pandemic has been around for as long as there as been people on every continent getting sick. But, with this year’s swine flu outbreak – thought to originate in Mexico – it has been tossed around the media like a catch phrase. Yes, swine flu is pandemic simply because it has spread around the world in a few weeks.

What’s interesting is if you read my other story today is that technology – specifically the Internet – is being used to fight the disease. Twitter is buzzing with swine flu tweets. But like everything important, people should look before they leap.

Public health experts say the Internet can be an important source of information on the H1N1 virus, but you need to know who’s at the helm. “In the current swine flu situation, some [sources] are alarmist, where others present a more balanced picture of concern,” says Dr. Robert Kim-Farley, director of communicable disease control and prevention for the Los Angeles County Department of Health Services and a professor of epidemiology at the UCLA School of Public Health.

On the other hand, knowledgeable, trusted sources, like the CDC, are on the Internet too and they are trying to spread the word faster than the disinformation sources and rumor mills.

Lest we forget pig farmers are non too happy with calling it swine flu. Pork belly futures are down; sales are lower. So, officials are using the scientific name Influenza A H1N1.